On a recent trip to the UK we took the opportunity to explore the three counties area of Britain – the traditional heart land of cider and perry production. From our rented coach house apartment in Hereford we set out on our bikes to tour a few of the different cideries of the region. Cycling through lanes, edged on both side with lush apple orchards we frequently dodged to the road-side to make way for tractors towing massive trailer loads of apples – each sharp corner was littered with squished fallen fruit. You could track the route from the orchard to the cidery! 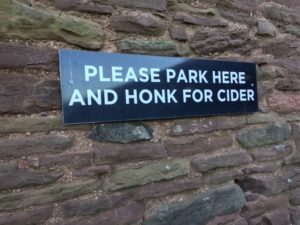 cidery was a very casual affair. Pulling up to a sign outside an ancient stone barn that read Honk for Cider, we rang our bike bells loudly until the farmer and cider maker Paul arrived. Following him into the barn we tasted a range of ciders from oak barrels lined up along the barn wall. The cider was mostly still, unsweetened and unpasteurised but all of it delicious. Take out sales consisted of a few pre-packaged bottles or for locals in the know, a recycled plastic jug filled directly from one of the barrels. We were the only customers on a November mid week day so Paul was happy to take time out and show us around the operation. Cider making in the UK is a tough business, excise taxes are high and competition from the big producers vigorous. This was definitely more of an apple growing operation which supplied the bigger producers with Paul making some cider for his own satisfaction. The equipment was basic and functional and the setting rustic but you couldn’t fault the quality of the cider. They had big plans for the place with

the addition of a restaurant 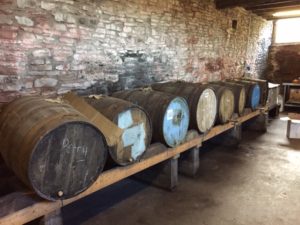 and a partnership with a celebrity chef in the works for the coming year. We left with as much cider as we could feasibly carry on the bikes and the offer of a reciprocal tour if he ever made it out to Vancouver.

Sean with one of the smallest oak tanks at Westons

In contrast our second stop was at Westons. We could smell the fermenting cider a full 2km away before we reached the site, nestled in a valley of hills in the middle of the Herefordshire countryside. Westons is the largest family owned cidery in the UK, a fifth generation of the Weston family is currently running the operation and making the cider. They produce 2 million litres of cider a year and I was amazed to find they do it exactly the same way that we do – everything is produced in the fall (hence that fermenting cider smell) and they mature and bottle through the year. Most of the big commercial players have switched to using frozen apple juice concentrate to spread production throughout the year. Since it was apple harvest time we were able to see the operation of the automated apple washing, milling and pressing line. They operate four huge bladder presses, each one approximately four times the size of our recently purchased tanks at the cidery. They have one hundred and twenty 200,000 litre tanks in an outside tank farm where the cider ferments away. To get this into perspective our new large tanks at the cidery are only 10,000 litres! Once the cider has been fermented it is racked and stored – some in more stainless steel tanks but a lot in the original oak tanks. The oldest date to when the cidery was first opened in 1880. The tanks are named after family members, favourite football teams and the largest tank (called Squeak) is over 160,000 litres. The cidery employs a specialist cooper whose job it is to ensure the tanks remain in good repair. We finished off in the packaging area. Four bottling lines produced the packaged product, a whole warehouse full of glass bottles were waiting to be filled and the keg storage area covered several acres with the kegs stacked 10 high. The scale was mind-blowing!

We finished off our day with a tour of the Hereford cider museum. Located in 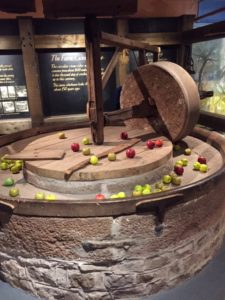 An old mill at the Cider Museum

the old Bulmer production building we spent a fascinating hour examining old presses and equipment and all things cider connected from 1940’s advertising posters, to a traditional cider makers smock and a beautiful 1700s glass goblet designed especially for the lord of the manor to enjoy his cider from. We left with a couple of books from the excellent cider based bookstore and more cider from their on-site store.

Our time was short on this particular visit and a return trip is definitely on the cards. If you find yourself in the three counties area, pick up a map of the local cider route with more than 20 cideries listed. It’s a great way to sample some UK heritage and tradition off the beaten track.